Yet you do not know what tomorrow will bring. What is your life? For you are a mist that appears for a little time and then vanishes. – James 4:14

Each day dawns full of sunshine and brimming with opportunity. Right?

Wait…not so much you say?

I keep pulling lines from the film, American Hustle, but I can’t help it. So many life lessons to be found.

There is a scene where FBI agent Richie DiMaso says to Sidney Prosser, “You ever think, like, how did I end up here? Like, how did my life become this? Do you ever think that?” Sydney simply looks at him and softly says, “Yeah, I do.”

Sometimes life may seem like a very random series of events.

If you look back closely, you will see a perfectly painted masterpiece. And that masterpiece is a self portrait. Good or bad.

Ah yes, the road not taken. As old blue eyes, Frank Sinatra, sang: “Regrets. I’ve had a few, but then again, too few to mention.”

And sometimes those regrets can come along on the road we did choose. You just never know. But Steve Winwood was so right with this; when you see a chance, you gotta take it.

The Bible reminds us of the fleeting existence we share here in this world. That this life is short. To not worry too much about tomorrow’s troubles today. And yes, to take those chances.

Find romance, fake it
Because it’s all on you

Yup, you are all alone in this world. And you have to reach a certain clarity to really perceive it. Yet, we have the power to make a change.

After leaving Traffic, Winwood was struggling to find success as a solo artist. Steve decided to take a chance of his own collaborating with lyricist Will Jennings (Barry Manilow, B.B. King, Joe Cocker, The Crusaders and many more) on most of the songs on 1980’s  Arc Of A Diver. It turned out to be a fantastic pairing and Steve had a breakthrough hit on his hands.  There’s not a bad cut on the entire album and the cover art was beautiful, too. 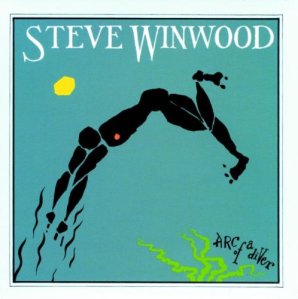 “While You See A Chance” was Winwood’s first Top 40 hit as a solo artist, reaching #7 on the Billboard Hot 100.

His solo success continued on with 1982’s Talking Back To The Night and especially with his 1986 release Back In The High Life (single “Higher Love”), but I think Arc Of A Diver remains his greatest solo work.

One interesting tidbit: the keyboard intro to the song came about by accident. Steve played all the instruments on the album and somehow deleted the original drum track he had recorded for the opening. When he realized what he had done, instead of re-recording the drum part, he used a keyboard sequence he had recorded instead. Wonder what it would sound like the other way? I can’t imagine the song opening differently!

“While You See A Chance” is all about taking on personal responsibility.  It’s on you. If you want it – whatever it is – you have to go out and get it. You may have to take a few risks and get burned a few times, but it’s all there for you.

One more thing: The Bible says, “God goes with you; he will never leave you nor forsake you.”

And that’s definitely one thing left worth knowing.

Listen to the original here: