But I trust in your unfailing love; my heart rejoices in your salvation. ~ Psalm 13:5

Trust you say? Everybody wants it, but few actually have it. Who can you trust? Friends? Family? Lovers? When you’ve lived as long as I have, you can get a bit jaundiced when it comes to matters of the heart. And, despite the reference to getting burned, we know that it’s a cold, hard world out there. And, in times like these, it feels like it’s only getting colder. But we have to try…what would life be if we didn’t even try?

So, how do we go on? How do we pick up the pieces and try again? It’s not easy, but we have to have faith and trust. We can start with our faith and trust in our Lord and Savior and build from that. I have often heard faith described as “choosing to believe in something despite the absence of proof”. No one can offer us proof that we can fully trust them, until we take that first leap of faith. We have to have the courage to take that first step forward. Only then can they begin to earn that trust.

This time you’ve got nothing to lose
You can take it, you can leave it
Whatever you choose
I won’t hold back anything
And I’ll walk a way a fool or a king
Some love is just a lie of the mind
It’s make believe until its only a matter of time
And some might have learned to adjust
But then it never was a matter of trust

A friend of mine recently wrote something on this subject that really touched me (I’ll paraphrase it here) and it inspired a lot of what is in this post.  She said that you can’t just stop loving, or wanting to love, because when it’s right, it’s the best thing in the world. Words have never rung more true to me. To try to deny the most human, most personal of our basic needs is an exercise in futility. You just can’t hold it back, no matter how hard you try. 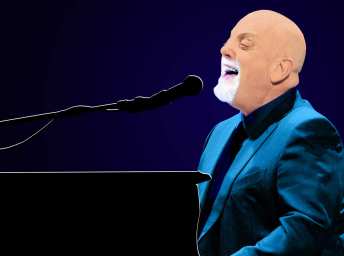 Billy Joel has written a lot of songs that follow this theme (“Keeping The Faith”, “Honesty” and “The Longest Time” are a few that come to mind), so we know that he has experienced these same feelings, very deeply and often. This song, long one of my “80’s Billy Joel” favorites came off his tenth studio album, The Bridge. “A Matter of Trust” went all the way up to #10 on the Billboard Hot 100 shortly after it’s release on July 28, 1986. The Bridge was Billy’s follow up to his 1983 lp, An Innocent Man, which was widely recognized as his doo-wop laced “celebration of love” to Christie Brinkley, and it’s clear that he was still basking in the glow from his burgeoning relationship with her.

Now, of course, we know that it can happen to us.  Billy and Christie’s relationship didn’t last forever and, sadly, it’s clear that this happens more often than not.  But, I’ve always felt that the spirit and essence of this song totally captured the hopes and dreams that we all have of finding, and keeping, that perfect relationship.

And, it’s out there…trust me. You just have to take that first step.

And Mizpah, for he said, “The Lord watch between you and me, when we are out of one another’s sight. ~ Genesis 31:49

Hey, if we can solve any problem
Then why do we lose so many tears
Oh, and so you go again
When the leading man appears
Always the same thing
Can’t you see, we’ve got everything goin’ on and on and on

Why do these cycles of life continue? Must we be doomed to repeat the mistakes of our past? Maybe, as the boys from 38 Special sang; we just need to “hold on loosely, but don’t let go”.

Yes, partings can be hard, whether those be with family, friends or lovers, and they can literally feel like a piece of our heart has been ripped away. But, the good news is that we can sustain, we can get by, we can recover. Sometimes it just takes a little help from someone else.

Go on and go free, yeah
Maybe you’re too close to see
I can feel your body move
It doesn’t mean that much to me
I can’t go on sayin’ the same thing
Just can’t you see, we’ve got everything do you even know we know

And, sometimes we just need to let go. It may seem like the hardest thing to do at the time, but as the days go by, we gain fresh perspective. But still…we can’t help but feel that nagging doubt in the back of our mind. This all seemed so right for such a long time, didn’t it? And, you wonder, do they feel this way too? This uncertainty? Parting certainly is, as Willie S. reminds us, “such sweet sorrow”.

I can’t go on sayin’ the same thing
‘Cause baby, can’tcha see, we’ve got everything goin’ on and on and on

This song always seemed to perfectly capture the “sweet sorrow” of the empty achiness we feel when these situations in life occur. It was originally written and released by Daryl Hall and John Oates on their 1980 album, Voices. They never released it as a single, however, so it never gained much notice until Paul Young covered it in 1985.

The Hall & Oates version was a slower, more gospel-like sounding arrangement and both Daryl and John were amazed by the difference created by Paul and his producer, Laurie Lathem. According to an interview with Daryl Hall in 2014, he counts this as his favorite cover of one of his (and John’s) songs.  Paul’s version went all the way to #1 on the Billboard Hot Singles chart and became a gold record in 1985.

Paul went on to have several other “blue-eyed soul” type hits with “Love Of The Common People”, the Marvin Gaye classic “Wherever I Lay My Hat” and “Everything Must Change”, along with several others.  This song, however, was always my favorite and the one I think he will always be most easily recognized by and remembered for.

So, if you had a “sweet sorrow” parting with a loved one after the holidays and are feeling a bit down, take heart in the comfort provided by our Lord, and reach back in time to listen to the soulful sound of Paul giving his best.

Check out the video here:

And check out the original from Hall & Oates here: