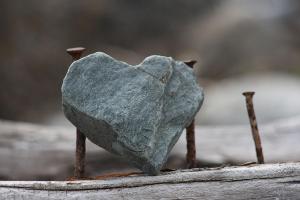 Blessed is the one who fears the Lord always, but whoever hardens his heart will fall into calamity. ~Proverbs 28:14

Cryin’ on the corner, waitin’ in the rain
I swear I’ll never, ever wait again
You gave me your word, but words for you are lies

Darlin’, in my wildest dreams, I never thought I’d go
But it’s time to let you know

Yup, life can really throw you some curve balls. Can’t resist a little baseball reference here – I’m a huge fan, spring training is in full swing and we’re just a couple of weeks away from the season openers. But I digress…

Yes life can be full of tough games, with love being the toughest of them all. And when it roughs you up enough, the temptation is to become a little jaded, a little cynical…a little hard-hearted.

And though I can only speak for one side of the gender gap, it seems to me a trait most often worn by the fairer sex. Then again, I guess that’s because we menfolk are most often giving them reason to be. And it’s funny how the softest thing in the world – a woman’s heart – can somehow turn into the hardest stone you’ve ever seen.

Darlin’, in your wildest dreams, you never had a clue
But it’s time you got the news

And when it does, it often seems like it comes out of nowhere, in the middle of the night. Gone with the wind…and a colder wind never blew.

You know, it’s funny but that’s how some folks are about Jesus, too. They can be the warmest, most caring folks in the world…but let the conversation turn to the King of Peace and you’ll surely find some hardened hearts out there.

And you gotta wonder why.

It’s hard to say where the inspiration for Quarterflash’s only Top 10 hit “Harden My Heart” came from. It was written by Marv Ross, the guitar playing husband of Rindy Ross, the sax player and lead vocalist for the group.

And theirs was seemingly a fairytale story: they met while studying for teaching degrees at Western Oregon University. They fell in love while gigging for local Pacific northwest area bands and, after pursuing their teaching careers for three years, ultimately founded their own group – Seafood Mama – playing local dive bars between Portland and Seattle during the late ’70’s.

Darlin’, in my wildest dreams, I never thought I’d go
But it’s time to let you know

And I’m sure Marv and Rindy never thought that they would become huge stars – well at least one-hit wonders – when they changed their band’s name to Quarterflash and got signed with Geffen Records in 1981. But, it was the year MTV debuted and there was not a huge catalog of music videos available, so Quarterflash’s catchy tune with the “Pat Benatar/Raphael Ravenscroft” sounding sax player got heavy rotation. It would go on the reach #3 on the Billboard Hot 100 and become a million selling, Gold certified single.

A few interesting notes about Quarterflash:

Marv and Rindy have stuck together ever since, reforming Quarterflash in the early 2000’s and releasing two more albums, though neither has seen much commercial success.

I guess you could say the Ross’s have kept their hearts from becoming hardened and endured as a couple, both musically and romantically.

We should all strive to do likewise.

He has redeemed my soul from going to the pit, and my life shall see the light. ~ Job 33:28

As Joe Walsh said on the recent History Of The Eagles documentary, “As you live your life, it appears to be anarchy and chaos, and random events, non-related events, smashing into each other and causing this situation or that situation, and then, this happens, and it’s overwhelming, and it just looks like what in the world is going on. And later, when you look back at it, it looks like a finely crafted novel.”

And so it goes for most of us. We know we are always and forever searching; for what only heaven knows. And we don’t really know where we are heading. Or what we are going to be. But He does.

Been close to the edge, hanging by my fingernails
I’ve rolled and I’ve tumbled through the roses and the thorns
And I couldn’t see the sign that warned me, I’m
Heading for the light

And sometimes it surely does feel as if we are just barely hanging on. Perilously close to the abyss and the jagged, rocky bottom below. Straining so hard to keep from tumbling down, the sweat and blood can pour down into our eyes and obscure our vision. It’s so easy to lose your way in this world.

The only thing any of us can do is to “keep on keeping on”, as my old Pop used to say. Just keep on heading for the light.

I’m pretty sure that George Harrison didn’t really have a plan to put this stalwart group of seasoned pickers together into an actual band, but somewhere along the way the light came on. I know it did for me the first time I dropped the needle on The Traveling Wilbury’s debut album.

And just like the perfect hindsight Joe Walsh spoke of, at the end, it really did look – and sound – like a finely crafted novel.

I don’t see nothing new but I feel a lot of change
And I get the strangest feeling, as I’m
Heading for the light

In 1987, George Harrison had pulled together a group of his “mates” (Orbison, Dylan and Lynne) to record a song to be used as the “B” side for the single “This Is Love” off his latest album, Cloud Nine. When the song they recorded, “Handle With Care”, was first submitted to Warner Brothers execs Mo Ostin and Lenny Waronker, both immediately knew it was far too good a song to be used as a throwaway “B” side. They urged George to run with it as the lead for a new album project. The rest, as they say, is – solid gold – history.

A few interesting tidbits about the Wilbury’s:

I see the sun ahead, I ain’t never looking back
All the dreams are coming true as I think of you
Now there’s nothing in the way to stop me
Heading for the light

Unfortunately, these two albums were all she wrote for the Wilbury’s. Roy Orbison died before the second album was completed in 1988 and George followed soon after in 2001. The band paid tribute to Roy in the video for the song “End Of The Line” by placing his guitar in a rocking chair and showing his photo.

Bob, Jeff and Tom are all still rocking and I have no doubts that both George and Roy definitely found their way at the end…with both of them surely heading for the light.

And the one that started it all:

I have not done this before, but after reading Pete Deakon’s post today I felt compelled to. I have often observed (with amazement) the inverse proportion that the traits of compassion and intelligence so often have within mankind (myself included).

And look for a new UTRS post coming soon to take this thought a little further!

(This one’s long and experimental. If you don’t do anything, scroll to the bottom to watch a video I promise you’ll enjoy.)

It feels like I should be embarrassed to admit that as a kid I watched my family’s recorded-from-television Rocky III VHS so often that I broke it. To this day I can still picture my mom’s handwriting on the label. One day after thinking it finished rewinding, I pressed eject and discovered the tape had snapped. Why that movie was ever in our house is beyond me. We never watched it as a family. Maybe it was my dads. I do remember going to see Rocky IV in the theater, though I was very young. Come to think of it, a few years later on a Bunco night at our house my dad took my brother and I to see Rocky V at the dollar theater. Yep, I’m sure of it…