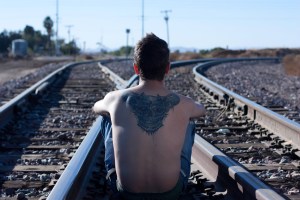 For the flesh sets its desire against the Spirit, and the Spirit against the flesh; for these are in opposition to one another, so that you may not do the things that you please. ~ Galatians 5:17

Now blue ain’t the word for the way that I feel
And the storm’s brewing in this heart of mine
This ain’t no crazy dream, I know that it’s real
You’re someone else’s love now you’re not mine

Yes, we are born into sin and it’s only through His grace that we are saved. Even then the temptations lie there, seething and waiting, just below the surface, ever lurking. Every day we face the ultimate decision and we must answer the ultimate question. The one that Lenny Kravitz so succinctly posed “Are you gonna go my way?”.

It’s a constant struggle. One starts to wonder, can I ever really completely follow the straight and narrow path? We are perpetually torn and tortured within ourselves. I have been told that living in such a state is a sure sign of having received God’s most gracious gift. That only those truly saved will experience such constant turmoil; it is only those without this gift that can walk through this world without a troubled conscience.

I’ve been reading Rick Bragg’s magnificent book, Jerry Lee Lewis – His Own Story,  and I can testify with certainty that The Killer – as Jerry Lee is known – was certainly not one of those without a troubled soul. Born into the Pentecostal Assembly of God and raised by his mother, Mamie, to revere the Gospel, Jerry Lee found it exceedingly hard to reconcile the devil’s music in his hands with the Godly beliefs in his heart. He once asked Elvis Presley a fundamental question that apparently had tormented him all of his life: “Do you think you (or me) can play rock-n-roll and still get into Heaven?”.

Now, I still believe that Elvis is the true king of rock-n-roll, but after spending some time researching, one can see where the Killer may have a case to dispute the throne. The legend goes that Elvis came to the Sun Records Studios in Memphis to meet with Jerry Lee one day shortly before he was inducted into the Army and, with tears in his eyes, said simply, “You can have it.”

“Crazy Arms”, originally a  hit for Ray Price, was the song that first began to open doors for Jerry Lee – it sold 300,000 copies – but it wasn’t until the legendary Otis Blackwell penned “Whole Lot Of Shakin’ Going On” took off that Jerry Lee shucked the “rockabilly” label and was catapulted to heights above Elvis, Carl Perkins, Chuck Berry and Buddy Holly – and everybody else – in the rock-n-roll pecking order of the day.

A few of my favorite Jerry Lee stories:

After all these years, the Killer remains steadfast in his two core beliefs: that he is the greatest rock-n-roller of all time and in the Gospel of the Pentecost. And he has yet to answer that fundamental question that has haunted him his entire life.

As he strolls his farm today in Nesbit, Mississippi, he often walks down to the railroad tracks nearby to see the big trains lumber through; some heading in one direction and some in the other. And he knows he’ll get his answer one day.

Listen to the song that started it all here:

And the song that made him a star:

And just in case you still don’t think he can rock-n-roll:

“Jerry Lee Lewis, His Own Story” by Rick Bragg