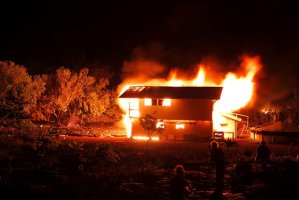 I would hasten to my place of refuge from the stormy wind and tempest. -Psalms 55:8

Ooo, a storm is threat’ning
My very life today
If I don’t get some shelter
Oh yeah, I’m gonna fade away

Storms; life is full of them. And the Bible teaches us that we will face troubles in this life.  Some are major hurricanes, others minor squalls. It is some comfort to have the reassurance that Jesus overcame this world and so shall we. But that doesn’t make the troubles any easier to deal with in the present.

And so it was in the summer of 1969. On August 17th, the heat of the Gulf Coast night was broken by the howling 175 mph winds of Hurricane Camille. My Uncle Richard was living in Metarie, Louisiana at the time, near the shores of Lake Ponchartrain. Fortunately he, my Aunt and cousins were able to evacuate before it hit.

When it was all over, there were 259 people dead and over 1.4 billion dollars worth of damage. Camille was the second of only three Category 5 hurricanes to strike the U.S. in the 20th century, along with Labor Day Hurricane in 1935 and Hurricane Andrew in Miami in 1992.

And, yes the war in Vietnam raged on with still over 500,000 U.S. troops on the ground and more than 11,000 of those killed in battles that year. Even as Ho Chi Minh passed away in September, the war was still very much in question.

The flood is threat’ning
My very life today
Gimme, gimme shelter
Or I’m gonna fade away

So it was, and the mud and the blood and the flood all indeed seemed to be overflowing like a “red coal carpet” and a “mad bull lost it’s way”.

And just a couple of weeks before Camille struck, we were all shocked to the core by the horrific Sharon Tate murders, committed by the truly evil Charles Manson and his desert based “family”.

And they were for the Rolling Stones, as well. In that same fall of 1969, the Stones were struggling with the year long prospect of pulling their latest album, Let It Bleed, together without the help of the band’s founder, Brian Jones. Brian had been dismissed from the band back in June due to increasing personal issues and drug problems, and was found dead a month later in the bottom of his swimming pool.

Let It Bleed was a somber tome, perfectly matching the events swirling at the time and “Gimme Shelter” was no exception. In the book Old Gods Almost Dead: The 40-Year Odyssey of the Rolling Stones , author Stephen Davis wrote: “No rock record, before or since, has ever so completely captured the sense of palpable dread that hung over its era.”

Mick and the boys had surely captured a sign of the times.

In an interview just a year ago on NPR’s All Things Considered, Mick Jagger talked freely about the dark lyrics and the making of the song. “It was a very moody piece about the world closing in on you a bit…When it was recorded, early ’69 or something, it was a time of war and tension, so that’s reflected in this tune. It’s still wheeled out when big storms happen…”.

But some of the most intriguing factors in the recording were created by the incredible background vocals provided by gospel and soul singer, Merry Clayton. Like many great singers, Merry grew up singing in the church. Her father was a Baptist preacher in New Orleans, so I’m sure you can imagine what some of those church services sounded like!

She later pursued singing as a career, performing backing vocals for Bobby Darin, Elvis Presley and The Supremes among many others, but is probably best known for her work as a member of The Raelettes, Ray Charles’ backup singers.

As the story goes, Merry got a call in the late evening (she was already in bed for the night) from a producer she knew – Jack Nitzsche – begging her to come down to the studio to lay down some backing vocals for this project he was working on. At the time, she didn’t even know who the Rolling Stones were.

Merry was reluctant; she was pregnant at the time and her husband even got a little miffed at Nitzsche for calling so late. But once he understood who it was -the Stones – and what was going on, he said  “Honey, you know, you really should go and do this date.”

The rest is history.

She got out of bed and went down to the studio – curlers still in her hair – and met with Keith Richards, who ran through what they wanted her to do. She was bit put off by the dark lyrics at first, but once she understood the gist of the song and it’s meaning, she was ready to go. She did three takes and said “It’s late, I gotta go back to bed.”

Those three takes were some of he most powerful backing vocals ever recorded. She put so much into it that her strained voice began to crack right in the middle of the “Rape, Murder” part.  And, if you listen very closely on a good recording of the song, you can actually hear Mick, Keith and Jack hooting and hollering in the control booth in sheer amazement at the emotional delivery she poured into the track.

It was one of the greatest performances of her career.

Ironically, it also turned into tragedy, as she lost her baby to miscarriage shortly after leaving the studio. It has been widely assumed that the strain of the performance caused it. Years later, Merry still found the song hard to hear, and nearly impossible to sing, due to the dark memories of the night.

“Gimme Shelter” went on to be named the 38th ranked song on Rolling Stone magazine’s “The 500 Greatest Songs of All Time” list in 2004 and was also the name of the documentary film detailing the final weeks of the Stone’s 1969 U.S. tour culminating at the disastrous  free concert at the Altamont Speedway in California.

Martin Scorcese must have also been a big fan, as he has used the song in three of his films: Goodfellas, Casino and The Departed. Interestingly enough, he chose not include it in his 2008 documentary film about the Stones, Shine A Light.

So, crank it up loud and let it roll, as only Mick and the boys can do. And though things may seem grim; remember that love truly is, as Merry sang “just a kiss away”. And be sure to listen for Merry’s voice breaking. Wow!