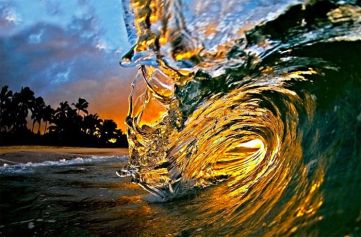 As we slide towards the end of summer (odd how summer’s end seems nearer just because the kids are back in school) even though the weather gives us no such indication, one turns nostalgic and yearns for just one more tango with the ocean.

And as we think of the ocean, the mind tends to trip lightly through memories of beaches past. We can see them clearly in our minds and the summer sun is never the one of harsh heat and burning white sand, but that of softened and shadow cast late afternoons and early evenings.

We all love to reminisce, basking in the memories of what has been and what once was. I think even more so as we get older and begin to realize that the years ahead of us are probably fewer than those behind. And as the Bible says, there is nothing new under the sun. Surely not to God’s eyes.

What a beautiful portrait this song painted, when I first heard it splashing off the airwaves in 1968. It was in stark contrast and a welcome diversion to much of the music coming out that summer with the Vietnam war still smoldering after the Tet offensive.

As a youngster living in Winter Park, Florida – just a short 45 minute drive to the beach – this was a home grown vision. You knew the Beach Boys were the choirboys of the West Coast, but that didn’t stop Floridians from claiming them as first cousins.

The brothers Wilson (Brian, Dennis and Carl) along with cousin Mike Love and pal Al Jardine had perfected a sound and harmony like no other before them. They truly were “America’s Band” and created a culture way beyond just music.  Every guy I knew was wearing Levi’s cords, desert boots sans socks, and super cool Hang Ten shirts.

And their conjured images of suntanned young ladies with silky hair and tiny bikinis made all of us guys apply another coat of wax to our ‘boards – surf, boogie or skim – and seek out rides from older kids to get back to the beach.

“Do It Again” was at the bridge between the Beach Boys early 60’s surf sound – which I think ended with their 1966 masterpiece Pet Sounds – and their more progressive “Beatle-esqe” works of the early 1970’s (“Sail On, Sailor”).

It lived in the thin air between what they used to sound like and what they would sound like in years to come. Critics panned the single as a sellout – they really had given up the pure “surf” sound by 1965 and had suffered a resultant drop in popularity – but to those of us who had grown up on that sound and their standard themes (the beach, the girls and the cars) the return was triumphant.

It starts out with this low driving beat and bass line that led you to believe this was going to be just another in the style of most of their newer material.  But then it builds and crests magnificently into that trademark 5-part harmony and “Help Me Rhonda” hand claps. It literally makes my neck hair stand up to hear it even today.

The Boys were doing a bit of reminiscing of their own here; not simply hit-seeking, but perhaps just a bit nostalgic for the way things used to be. As Carl Wilson noted in Melody Maker magazine:

“Yes, I suppose it has got the old Beach Boys surfing sound. It’s back to that surfing idea with the voice harmony and the simple, direct melody and lyrics. We didn’t plan the record as a return to the surf or anything. We just did it one day round a piano in the studio. Brian had the idea and played it over to us. We improved on that and recorded it very quickly, in about five minutes. It’s certainly not an old track of ours; in fact it was recorded only a few weeks before it was released. We liked how it turned out and decided to release it.”

“Do It Again” was co-written by Mike Love and Brian Wilson shortly after a trip to the beach by Mike to go surfing with an old friend. He came back inspired with the main lyrics and sat down with Brian to flesh it out.

According to Keith Badman’s book The Beach Boys. The Definitive Diary of America’s Greatest Band: On Stage and in the Studio, Brian Wilson said the song was probably the best collaboration he and Mike had ever worked on.

So, while there’s still a bit of heat in the air, crank up the Woody, strap on the boards, grab your huarache sandals and get ready to take a trip to the beach.

Even if only in your mind.

Listen to the masters here in this fantastic 50th anniversary version. It’s 2:45 of made-in-the-USA pop perfection: